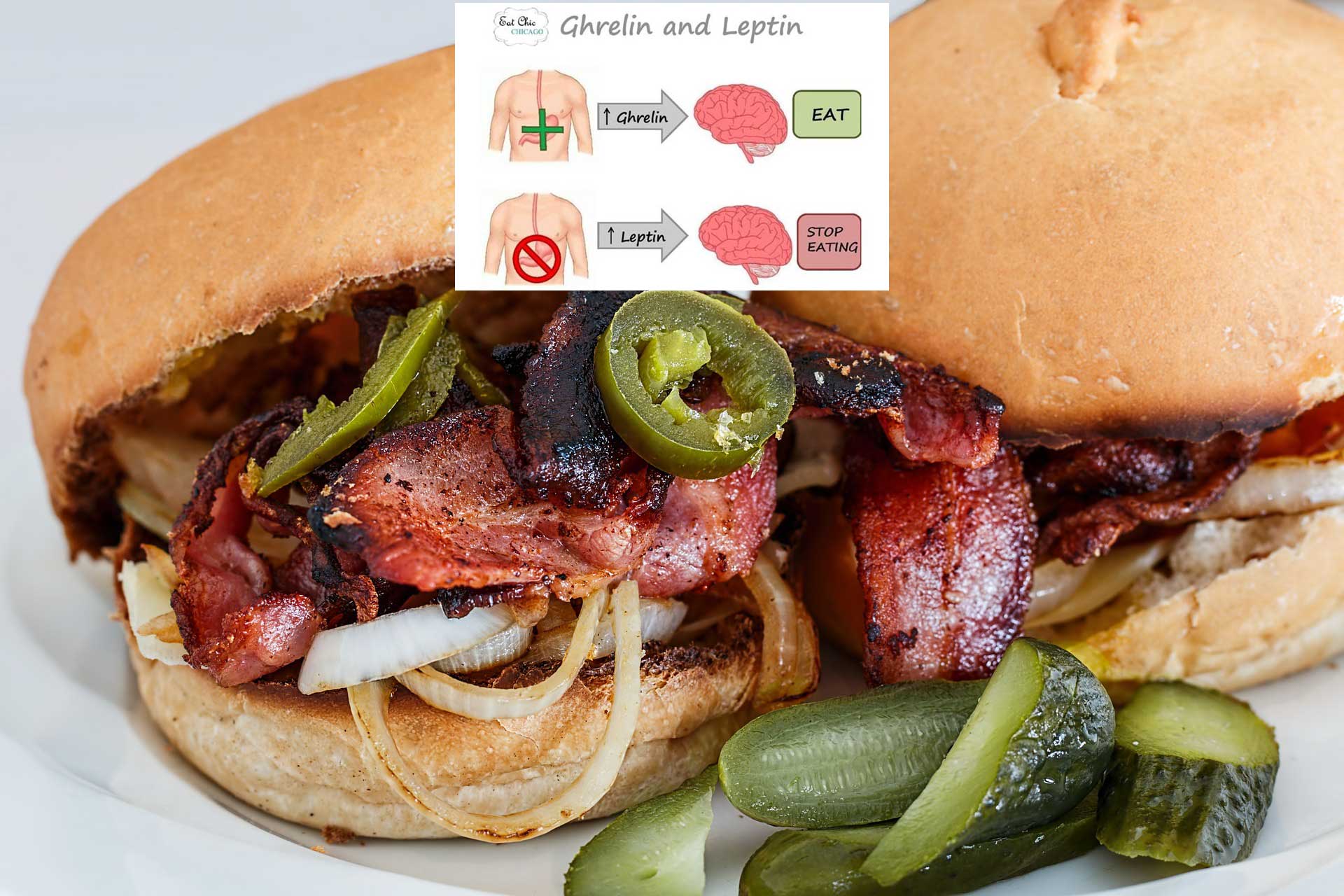 Your body doesn’t want to lose weight. It’s going to fight against you as much as it can. Thousands of years ago, when humans couldn’t find their nutrition in grocery stores, people had to conserve energy, and our hormones developed to help us when food was scarce. Unfortunately, our bodies still try to save energy even though modern diets are filled with surgery, high energy foods that are easy to eat in overabundance.

Ghrelin is a hormone produced in the stomach, intestines, and a few other places throughout the body when your stomach is empty. It acts on the part of the brain called the hypothalamus, which causes hunger and stomach acid secretion.

When the stomach stretches after a meal, secretion of ghrelin stops, and hunger subsides.

Ghrelin also has effects on energy output, adjusting the amount of energy the body uses to store fats, glycogen, and to produce body heat.

Ghrelin acts in synergy with leptin, a hormone produced by fat cells that decreases hunger.

The difference between the two hormones is that ghrelin has an immediate effect on appetite and leptin has more long-term effects.

Do you know that feeling you get when you haven’t eaten in a while, and all you can think about is food? You can thank ghrelin for that.

Ghrelin increases levels of dopamine in a part of the brain called the substantia nigra.

When the brain releases dopamine, it gives us feelings of reward.

This pathway is essential for reinforcing behaviors like eating food, drinking water, or reproducing.

Levels of ghrelin circulating through the bloodstream are highest during periods of fasting and lowest after eating.

After a meal, ghrelin levels remain lowered for about three hours. A strategy to keep hunger under control is to eat small meals every three hours.

Never allowing yourself to get too hungry will keep your body from craving food and prevent overeating inhibiting ghrelin.

Ghrelin and Leptin hormones during sleep

To keep these hormone levels high, make sure you prioritize sleep. For adults, this means getting at least seven hours per night, but preferably more than eight hours.

Make sure you take time out of your day to unwind and prioritize activities that you enjoy.

Foods high in protein also increase the feeling of fullness, so include lean protein sources in your diet like chicken or fish.

Leptin is one of the most vital hormones for regulating hunger.

If you’ve never heard of this hormone before, it may be because of its relatively new unearthing.

Douglas Coleman and Jeffery Friedman discovered leptin in 1994, and they later shared the Albert Lasker Basic Medical Research Award in 2010 for their research.

Because of its effects on metabolism, leptin is often called the starvation hormone. Fat cells produce leptin, which then either increases or decreases hunger by acting on the part of the brain called the hypothalamus.

High levels of circulating leptin signal for your brain to stop eating and for hunger to decrease. As you lose weight, your body has less fat tissue, and leptin production decreases.

This decrease in leptin signals tells your brain to increase food intake and hunger again. Studies on mice have also shown that leptin may affect metabolic rate by increasing what is known as thermogenesis (the creation of heat in the body).

This decrease in leptin means a sharp decline in metabolism that makes weight-loss more difficult.

If you’ve ever tried one of these diets, you’ve probably experienced an insatiable desire to eat.

Leptin’s effect on appetite is likely an evolutionary adaption from prehistoric times when food was scarce, and humans needed to conserve energy during the famine.

Differences between ghrelin and leptin and insulin

Insulin resistance is when the body stops responding to the hormone insulin, a condition often observed in obese patients particularly those with high-sugar diets.

Because of their high body fat levels, they have high levels of circulating leptin, which their bodies can’t handle properly, and their brains don’t signal fullness.

Factors that can contribute to insulin resistance include:

Other research has found people who lose weight show a more significant drop in leptin levels than individuals at the same bodyweight loss difficult and can contribute to regaining the weight.

The best strategy to lose weight that stays off is to eat a diet high in filling foods to prevent the risk of leptin resistance.

For sustainable weight loss, avoid eating processed foods with added sugar. When shopping, stick to the outside aisles of the grocery store filled with fruit, vegetables, meats, fish, and dairy.

High fiber foods, like fruit or vegetables, are more filling than foods lower in fiber. For example, 150 calories from the sweet potato will lead to more fullness than 150 calories from white rice and will help prevent overeating.

Before reaching for a high-sugar dessert, eat a salad first and wait for the feeling of fullness to kick in.

Foods that are high in protein are also filling and will prevent overeating. Increasing protein intake will not only decrease hunger, but it will also lower carbohydrate intake.