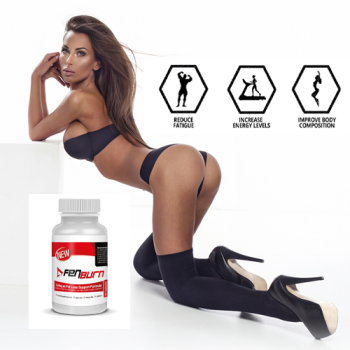 Fenburn is a thermogenic, fat-burning, a diet pill that is designed to increase the metabolic rate and so burn off fat faster. Slimming .com, the company that markets and resells FenBurn, claims that there are no side effects associated with this product, yet some of the ingredients, such as caffeine and bitter orange extract, are well known to cause side effects, some of which can be serious.

This is another slimming product that fails to disclose the quantities of the ingredients, which is always a concern. So, while the thermogenic effect of Fen Burn may have a small weight loss benefit, we doubt that it matches up to the claims of the manufacturer.

The ingredients of this diet pill, which are mainly targeted at boosting the metabolism, include bitter orange, which has been linked to increase in blood pressure, heart palpitations, increase in heart rate, fainting, heart attack, and stroke.

The relatively high levels of caffeine in Fen Burn could cause insomnia, dehydration, palpitations, jitteriness, headaches and increased blood pressure.

This Fat Burner also contains Bioperine, which may cause other medications to be absorbed more effectively into the bloodstream; potentially causing increased side effects from those medications.

To Buy Or Not Fenburn?

There have been positive customer reviews made with regards to this supplement, and the thermogenic and stimulant effect of the product may help people burn off fat faster.

However, the lack of any information on the quantities of the ingredients contained, make it impossible to say if the supplement would be effective.

What is more of a concern about Fenburn, however, are the potentially serious side effects. The product contains a number of stimulants that, when combined, could cause increased blood pressure, heart palpitations and possibly even heart attacks and stroke.

The Bioperine could also interact with other medications. It is because of these, potentially serious side effects, that we will not be adding FenBurn to our approved list of weight loss products.

Our Tip: Instead of using this supplement, consider using a proven brand – CLICK HERE

If you have been trying to lose weight recently, you will know how tough it can be. On the one hand, you need to reduce your calorie intake, and that can make you feel tired and lethargic, and on the other hand, you are supposed to increase the levels of exercise you take.

The combined effect of fewer calories and more exercise can leave you feeling weak and that can sap the willpower that you need to succeed.

If you’ve experienced this weight loss conundrum, you might have come across so-called fat burners, that promise to increase your energy levels and increase the rate at which you burn off fat.

If you’ve seen FenBurn reviews and you thought that it all sounds too good to be true, or perhaps you have seen this supplement on Amazon, and you wondered if it really works, here’s a straight talking review of Fen Burn.

It includes what ingredients are contained the supplement, and it answers the question of whether or not there any side effects that you should be worried about.

Is marketed as an thermogenic diet aid, which means that it is designed to increase the metabolic rate so that you are burning off calories, even when resting.

The product is marketed by a UK company called slimming [dot] com Ltd (website offline right now). There are contact details for the company on their website, which is always a good sign, but it should be noted that the website does suggest that the company do not manufacture the FenBurn supplement themselves.

Reviews would have you believe that it is a super strength thermogenic that will make weight loss much easier, but how true are those claims? There is no doubt that thermogenic compounds, such as capsaicin, do boost the metabolism.

The stimulants in this fat burner, such as caffeine, will also give you more energy, but they could also cause some side effects too. So, read on, and we will explain the pros, and the cons, of using this pill to lose weight.

What are the ingredients?

This diet pill contains a range of thermogenic compounds and stimulants that will increase the metabolic rate and make you feel more energetic and alert.

One big plus for FenBurn is that, unlike many other diet supplements, the quantities of each of the active ingredients are clearly displayed on the website and on the packaging.

This level of transparency does give you a little more confidence in the product. Here are the main active ingredients contained in the supplement and an explanation of what each of them is designed to do:

Bitter orange is an ingredient found in many diet pills. It contains synephrine, which has been proven in studies to increase the metabolic rate and energy levels. (1)

Capsaicin is the compound found in hot peppers and cayenne pepper and it’s what gives the spices the heat. Capsaicin has a thermogenic effect on the body, which will make you burn more calories, and it also is thought to have a mild appetite suppressing effect.

As we all know, caffeine is a stimulant that will provide you with a short-term energy boost and make you feel more alert. It will also provide a small boost to the metabolism, so it could help to burn off a few more calories as well.

Green tea contains antioxidants called catechins, which also have a mild metabolism-boosting effect. Green tea is well-known for its health benefits and is used in Chinese traditional medicine.

Oolong tea is made by partially fermenting leaves from the tea plant and it provides a metabolism-boosting effect that could help you burn off fat faster. There have been studies conducted that have proved that consuming Oolong tea could cause a decrease in the body’s fat content.(2)

Bioperine, which is extracted from black pepper, is known for its ability to increase the absorption of nutrients into the body.

It will, therefore, increase the effectiveness of the other ingredients. It will, however, also increase the absorption of other drugs that you might be taking, such as prescription medication.

Vitamin B12 is found naturally in dairy Products and in meat. It is used by the body in the process of creating energy from the food you eat. It is also important for the health of the nervous system.

L-Tyrosine is an amino acid that is said to have appetite suppressing properties, though there is little evidence to back that up. It is a naturally occurring enzyme that is found in meat and dairy products. There is also some evidence that L-Tyrosine increases mental alertness.

Are there any side effects with FenBurn?

The theory behind Fen Burn is sound. If you increase the metabolic rate, and you are eating fewer calories, your body will start to burn your fat reserves as a source of energy.

However, as anyone who has ever drunk one too many espressos will know, if you consume too many stimulants of any kind, you can experience dizziness, palpitations, anxiety, headaches, nausea, insomnia and fainting. If you have any pre-existing medical conditions, such as hypertension or heart problems, the side effects could be dangerous.

As we have already mentioned, Bioperine increases the absorption rate of nutrition into the blood, so it could cause side effects from any other medication you are taking and it could, potentially, cause an overdose.

This weight loss supplement contains a lot of caffeine and other stimulants, so you should only use as directed and it would be advisable to take it in the morning because, if you take it later in the day, it could cause insomnia. You should also avoid other sources of caffeine while you are taking FenbBurn, especially energy drinks that also contain high levels of caffeine.

The effectiveness of thermogenic compounds as an aid to weight loss has been proven in various studies and the increased energy levels will certainly help you stay more active and exercise for longer.

So, in theory, this diet pill could help you lose weight. However, some of the claims on the website are misleading.

FenBurn is not a magic answer to all your weight loss dreams. You will still need to exercise and eat a healthy, low-calorie diet, to lose weight. We do believe, however, that Fen Burn may help you lose weight faster.

Please note. Information contained in this article is an opinion based upon our research of publicly available information and it should not be construed as being professional medical advice.