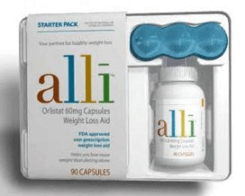 Orlistat, also known as Xenical or Alli, distributed exclusively to adults, is a weight loss aid or part of a continual weight loss maintenance program.

Alli received its approval as an over-the-counter item in 2007, however, prior to that, it was only by prescription.

With the convergence to over-the-counter availability, the dosage contains only half of the original strength.

Alli works by blocking the fat when you eat, therefore, when combined with a vigorous workout and diet meal plan, a person could easily shed unwanted pounds.

Manufactured by a company called GlaxoSmithKline, this brand of lipase inhibitors has been subject to speculation to the aversive side effects.

Does Alli have Side Effects

Consumer Reports (2009) that people should avoid taking Orlistat or Alli due to the side effects and the endangerment of liver contamination.  Report unusual happenings such as oily stools,  oily substances or stains in underwear, extreme urges to have a bowel movement, and severe abdominal discomfort or not being able to “go” at all.

We discourage purchasing this product online as the user may not receive a product which is licensed by a reputable pharmacy or pharmacist.

Previously, samples contained a drug called Meridia or sibutramine which can have serious side effects for people with gallbladder troubles and those without the ability to digest food and nourishing qualities correctly.

Generally, side effects will occur a few months of starting Orlistat.  On the other hand, reports of adverse side effects have been noted within one to four weeks of usage but get this… the effects can last as long as six months after stopping Orlistat.

In the case of Alli, it contains around half the normal requirements of a prescribed Orlistat. The most profound side effect is liver failure, but if the user experiences loss of appetite, or what appears too dark colored urine, itching, jaundice, or irregular bowel patterns while taking Alli, seek medical attention.

The Shoulds and the Should Not

Always speak with your primary physician or pharmacists before starting a new diet plan, especially if there could be underlying circumstances, such as diabetes, or a history of thyroid disease, eating disorders, liver disease or gallstones.

Prescribing this product to a young person who’s not older than 18 years old, is prohibited.  Besides that, sharing this weight loss supplement can never be a good idea.  With safety in mind,  there are several ideas when it comes to Orlistat.

Take vitamins such as A, D and E within two hours before Orlistat or right before retreating for the night and follow the experts’ advice relating to the correct dosage amounts and time frames.

Be consistent with your diet and routine exercise plan to ensure the potency of the pill and intake of protein, carbs and, highly important, fat.