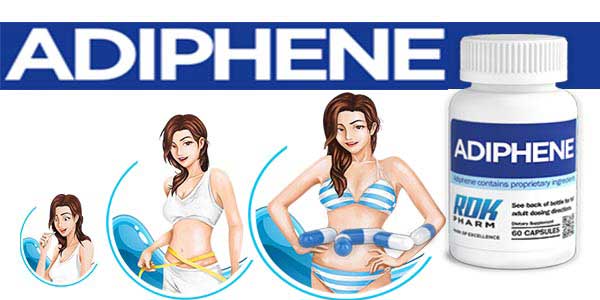 When you want to lose weight, the equation is pretty simple. You need to absorb fewer calories into your body than you burn off through exercise.

For most of us, that means going on a calorie-controlled diet and working out every day.

The problem with that is, you start off full of enthusiasm and determination, but that can soon fade, along with the willpower that you will need to succeed.

If you’ve been looking for something that will help you lose weight fast, you may have come across Adiphene reviews and wondered, does Adiphene work, or is Adiphene a scam?

Are there any side effects of Adiphene?

Adiphene is a phentermine over the counter equivalent. Although most people report no side effects with Adiphene and all the ingredients contained within the supplement are FDA approved, as with any effective medication or supplement, it is possible that you will experience some side effects.

Some of the side effects that could be caused by the ingredients in Adiphene are restlessness, anxiety, insomnia and headaches, palpitations, and stomach issues, such as nausea and diarrhea

Taking Adiphene may also increase blood pressure, so it is not recommended for people suffering with hypertension. You should not take Adiphene if you are allergic to shellfish, because chitosan is extracted from shellfish.

There is also a small choking risk associated with Glucomannan, because it expands when taken orally, so Adiphene should always be taken with plenty of water.

Adiphene should be used as a way of assisting weight loss alongside eating a healthy diet and taking exercise. It is also not recommended that you take it for longer than two months and if you are pregnant or breastfeeding. If you do experience any serious side effects, you should consult a doctor immediately.

Is Adiphene a scam?

In our opinion, Adiphene is not a scam. It contains ingredients that have been proven to be effective metabolism boosters, fat binders, and appetite suppressors, all of which can be an aid to weight loss.

However, whether or not those ingredients are present in high enough amounts in Adiphene to make much of a difference is unknown, because the manufacturers do not publish that information. If you combine Adiphene with a healthy diet and exercise, though, we believe that all the evidence suggests that it may help some people lose weight faster.

To help you decide if Adiphene might be right for you, here’s a review that will explain how it works, what it does to your body, and whether or not there are any side effects that you should be concerned about.

Adiphene is a weight loss supplement that claims to take a combined approach to help people lose weight by reducing the appetite, binding fat in the stomach and boosting metabolism. It’s actually quite unusual to find a supplement that utilizes a number of ingredients to produce an all-around solution for weight loss like this one does.

How Does Adiphene Work?

Adiphene contains ingredients that work on a number of levels. It contains appetite suppressants, which are designed to help you reduce the amount you eat at mealtimes and help you beat the cravings for between-meal snacks. It contains fat binders, which bind the fat in your gut and stop it from being absorbed by your body.

It boosts your metabolism, which makes you burn off calories faster. It is also designed to give you more energy during the day, which will help stay active and therefore assist your body in burning off even more calories.

What are the ingredients in Adiphene?

Before you take any supplement, you should always understand what the ingredients are and what effect they will have your body. Here are the main active ingredients in Adiphene and a brief explanation of how they work.

Bitter orange is a naturally occurring stimulant that increases the metabolic rate and it also suppresses the appetite.

Chromium picolinate helps to regulate insulin levels in the body, which in turn, helps to control how much fat the body stores.

Guarana extract comes from a South American bean and it has a stimulant effect, similar to that of regular caffeine, which will increase the metabolic rate and increase alertness and energy levels. Unlike the caffeine found in coffee, though, Guarana extract is said to be absorbed slowly by the body, so it gives a prolonged boost to energy levels and the metabolic rate, rather than the short-lived one that coffee would.

Chitosan is fat binder, which binds to fats in the digestive system so that they are passed out of the body, rather than being absorbed.

Panax ginseng is believed to have the ability to control blood sugar levels and reduce the amount of fat that is absorbed from food. As a nice side effect, it is also said to be good for increasing stamina and improving concentration.

Cacao extract contains theobromine, which is a compound known to inhibit fat digestion and fat storage. It also contains inhibitors that studies have shown to be an effective way to reduce the digestion of carbohydrates.

Adiphene also contains cinnamon extract, which is a natural thermogenic. Thermogenic compounds work by increasing your core body temperature, which makes you burn off fat faster. Studies have also shown that cinnamon reduces insulin resistance, which will help to reduce the storage of abdominal fat.

Capsicum is the compound found in hot peppers and chilies that give heat to food, and it too acts as a thermogenic. It has also been shown to have appetite suppressing properties and it improves circulation.

Vitamin B6 is a metabolism booster that also helps your body process food more efficiently. Metabolism boosters make your bodywork at a faster rate, so, in theory, you are burning calories, even while you are resting.

L-Carnitine HCL is a compound that assists the body in using fat reserves for energy, so it improves the effectiveness of workouts. In one study, it was found that participants who took a Carnitine supplement lost more than ten times the amount of weight as those who were given a placebo.

Ginger extract is another fat metabolizer that is contained in Adiphene, and it also helps to improve the digestive system. In addition to that, ginger is also a well-known thermogenic metabolism booster.

Glucomannan is the main appetite suppressor in Adiphene. It is a natural fiber, which expands when eaten and it takes some time to pass through the digestive system, so it makes you feel full for longer.

Is Adiphene safe to use?

For most people, Adiphene should be safe to use. One of the big criticisms of the product, though, is that the label does not disclose the quantities of the various ingredients. If taken in high enough doses, some of those ingredients could indeed be harmful, especially with the increase in heart rate and blood pressure that could be caused.

Our view on Adiphene

Some of the claims of the makers of Adiphene are a little optimistic, to say the least, and claims that you could lose weight without changing your diet are misleading. However, used in conjunction with a good exercise regime and a calorie-controlled diet, Adiphene could speed up the weight loss process.

Given that there are some, potentially, dangerous side effects, you should not take Adiphene if you are suffering from any pre-existing medical conditions, taking prescription drugs, or you are pregnant or breastfeeding.

Please note. The information contained in this article is an opinion based on our research of publicly available information and it should not be construed as being professional medical advice.